The descriptions below are general in nature and may not apply in all cases. It’s always important to read the customized instructions that come with a syringe. It might be helpful to practice with plain water until you feel comfortable and familiar with handling and using a syringe.

1. Parts of a syringe

A syringe is made up of three parts: the tip, the barrel, and the plunger.

The tip of the syringe is where a needle is sometimes attached. People tapering off psychiatric drugs typically use a slip tip syringe, shown above in the image, always without a needle. 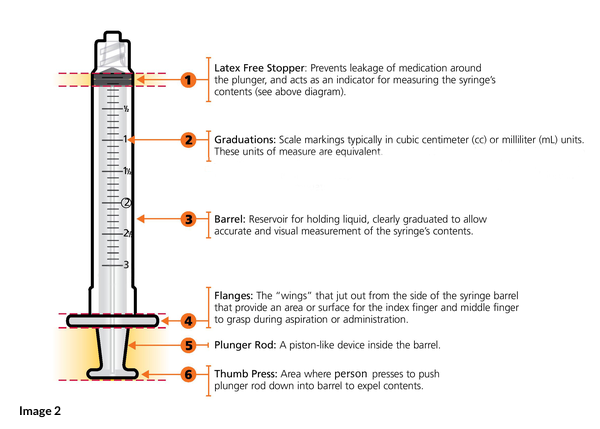 In the image above (not a slip tip syringe), the barrel (#3) is the reservoir that holds liquid. It is graduated with lines (#2) that are typically printed or etched on its surface and calculated in cubic centimeter (cc) or milliliter (mL) units. These units of measurement—cc and mL—are equivalent.

The plunger (#5) is a piston-type rod that moves up and down inside the barrel when the plunger is pushed or pulled using the thumb press (#6) and flanges (#4). At the end of the plunger is a slightly cone-shaped plunger tip (#1). This is what prevents leakage of liquid around the plunger. The plunger tip is also the indicator for measuring the volume of the syringe’s contents. 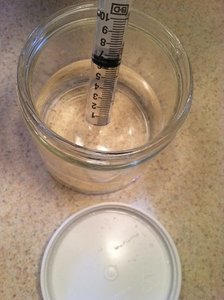 To operate a syringe, first make sure the plunger is pressed down to the bottom of the barrel. Then, place the tip in the liquid that you want to measure. Draw back on the plunger and the liquid will flow into the syringe, as demonstrated in the image above. The markings on the side of the syringe indicated how much liquid you have drawn in.

3. Understanding the units of measurement on a syringe

Depending on the capacity of a syringe, its primary measurement-line markings may be in milliliters (e.g. 1mL, 2mL, 5mL, etc.) or fractions of a milliliter (e.g. 0.1mL, 0.2mL, 0.5mL, etc.). The larger the capacity of the syringe, the more space there will be in between the measurement lines. As a reminder, mL and cc are equivalent units of measurement when reading the plunger.

Syringes with markings in decimals are optimal. If a syringe uses fractions, they’ll have to be converted to decimals for most taper-related calculations.

If a syringe has readings already in decimals, it’s important to locate the decimal point and not to confuse any extra zeros before or after the main number. The leading and trailing zeros before the decimal (i.e. 0.1) and after the last number (i.e. .10) are just placeholders. In other words,

Here's how to read calibration markings on a syringe:

Determine the increment between the visible numbers.

The visible numbers are next to the longer line markings on your syringe, as demonstrated in the image to the left. Determine what the increments between these major markings are. In this image, for example, the increment between the larger markings is 5, or 5mL.

Determine the increments of the smaller markings.

In this image, 5mL divided by 5 smaller measurement lines = 1mL. So, each smaller marking on this syringe is equal to a 1mL increment.

See the figures below for other examples. 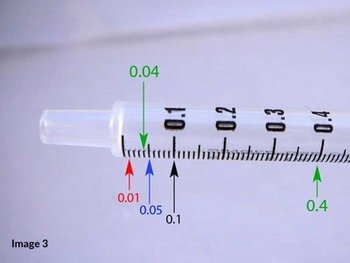 In the image above, the incremental amount between the visible numbers is 0.1mL. There are nine smaller lines between each number. Since 0.1 divided by 10 is 0.01, this syringe allows accurate measurements as small as 0.01mL (or one one-hundredth of an mL).

In the image above of this 3mL syringe, the smaller markings designate 0.1mL. These are the smallest-sized measurements you can make accurately with this particular syringe. The arrow is pointing to the 0.8mL (eight-tenths of a mL) marking.

5. Accurately measuring the amount of liquid in a syringe

Typically, the point where the plunger tip makes contact with the barrel is the spot to line up with the amount of liquid being measured. But plunger types can vary across brands and thus may need to be read slightly differently. Some plunger tips are plastic while others are rubber. Some are the same shape as the slip tip opening of the syringe, while others are flat, and still others domed.

Below are some general tips from the layperson withdrawal community for how to read several different types of plunger tips.

Plastic plunger tip in the shape of the slip tip opening 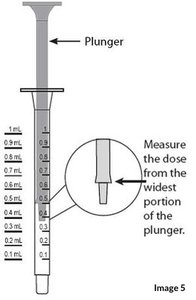 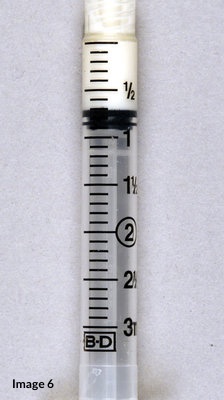 The image above shows a 3mL syringe containing liquid with a flat rubber plunger tip. For this particular syringe, the dose is measured by lining up the top ring of the rubber plunger with the desired calibration marking on the barrel. The liquid amount in this syringe is seven tenths of an mL (Translating this into a decimal gives you 0.7mL). 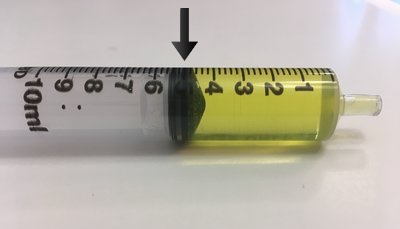