Experiment with sound and music

Sound has a profound effect on our minds and bodies, and in some forms it may have potential for healing. During withdrawal from psychiatric drugs, many people find that sound affects them differently than it used to. Even in cases where everyday noises cause aggravation, some people discover that there are other sounds that soothe, such as gentle sounds from nature, or the calming voice of a narrator on a relaxation tape or guided meditation, or the specially calibrated vibrations in audio recordings designed for sound healing.

When it comes to sound and music, experiences and preferences vary enormously. What is helpful for one person may not work for another—in fact, what’s helpful for a given person now may not work for the same person further down the road (or even later the same day), and vice-versa. Below are a few of the ways that people in the withdrawal community report using sound to help them cope with withdrawal symptoms and move toward a better state of balance.

Find a relaxation audio or video—or just a calm voice.

Sometimes the sound of a soothing voice is helpful for overstimulated nerves or an anxious mind. People in the withdrawal community have found a wide range of sources, including guided meditations (look for sample suggestions at the link) as well as podcasts, radio programs, or a long, droning voice on TV or YouTube. Some listen to a familiar audio book (retention isn’t necessary—there are those who listen to the same Chapter 1 every night). Just one example of some shorter narrative audios that have been found restful are the “Sleep Stories” found on the Calm app.

Another type of gentle voice that some people swear by is the particular, soft frequency found on videos offering ASMR (autonomous sensory meridian response), which also incorporates other, non-voice sounds and generally uses a visual component as well.

While some relaxation audios and videos focus on voices, others rely on meditative music alone, with or without gentle imagery. Here’s just one example of some ambient sleep music that has been found helpful in withdrawal. This rest-inducing video is in a similar vein.

Tune in to nature sounds.

For those who feel an affinity to nature, the sounds of the natural world have the potential to be deeply relaxing. When being outdoors among rustling leaves or gentle waves isn’t a possibility, there are countless nature audios and videos on YouTube as

well as apps to listen to inside. (Here’s just one source.) Like all things audible, preferences for nature sounds are highly individual—some people are drawn to the steady sounds of rivers or rain but find chirping critters distracting. Others like nothing better than immersing themselves in birdsong. Some who love being in nature make a sound recording of favorite spots, such as a flowing stream, and play the audio for themselves when they’re back at home. For those who savor the natural world, nature sounds have the potential to open the imagination and allow listeners to picture themselves in a scene and create a comfortable environment in their mind.

“Sound healing” is a term giving to the adaptation of ancient techniques that use sound and vibration. It’s based on the belief that humans are made up of different energy frequencies, and that by using various sources of sound and vibration, a person's energy can be better balanced, leading to improved health. Sound healing draws on a variety of media, including traditional Tibetan singing bowls, gongs, tuning forks, hammered dulcimers, wind chimes, and wind instruments. The voice can also be an instrument of sound healing, as with the harmonic resonance produced in meditative chants and Om chanting. One example of the latter, which some people in withdrawal find soothing to listen to, can be found here.

There are also modern electronic approaches to sound healing available in recordings that use brainwave entrainment techniques and binaural beats. One example (for purchase) is Andrew Weil, MD’s “Sound Body, Sound Mind: Music for Healing", offering deeply relaxing symphonic music designed to ease the listener down into a deeper state of brain-wave activity, then waltz them back up again.

Note that we don’t have much experience with the use of brainwave entrainment or binaural beats during withdrawal. While they’re widely said to be very safe and cause no adverse effects, we’ve seen boilerplate disclaimers suggesting that those with a history of seizures, heart disease, or women who are pregnant may want to discuss their use with their doctor. If you’re curious about brainwave entrainment and binaural beats, it may be a good idea to research further before diving in.

Sound healing, in its broader sense, can be accessed in a variety of ways, from formal treatment protocols implemented by trained therapists to simply listening to audio and video at home. YouTube.com has a wide array of choices to sample to see if they suit you.

When it comes to sound, one of the most common things reported by people undergoing withdrawal is that their relationship to music changes. Some people who once lived for loud, aggressive rock or rap may find that they need to switch to less stimulating musical forms, for example. Other people can only listen to music when they’re experiencing a “window,” or a respite from symptoms. Some music lovers discover that they’re unable to listen to music at all for some duration.

There are many reasons why this may be temporarily so. For some people who are especially sensitive to stimuli, music may sound like irritating noise, or it may increase symptoms of tinnitus, or it’s difficult to concentrate on, or it just doesn’t have the same effect that it had before. For others, music evokes painful memories or emotions or acts as a reminder of lost experiences. Some people who are musically inclined may find that they’re able to sing or play an instrument but not listen to music produced by others. For a lot of people going through withdrawal, the ability and desire to listen to music fluctuates in some way over the course of recovery. What’s important to remember is that many who’ve undergone withdrawal report that their enjoyment of and connection to music returns to normal once they have fully healed.

During the times when listening to music is beneficial, some people find it a valuable tool in helping them to “feel.” Blunted emotions are a common effect of psychiatric drugs, and it can take time and gentle persuasion for those emotions to become accessible again. Some listeners purposely turn on soothing or sad music when they need the relief that comes from crying, while others seek out angry rap in order to process their feelings of rage. For some people, using music to cope with or lift up their emotions means that they tread lightly in order to avoid triggering unwanted feelings. Everyone’s connection to music is highly personal, and the link between music and emotion is a deeply powerful one—one that may be used in support of healing when the time is right. 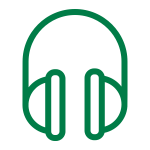