How I Healed from Benzodiazepine Withdrawal-induced Insomnia

In the fall of 2007, I was in the midst of the most unmanageable stress I’d ever experienced. My new job, which included an hour commute each way, was counseling college students, some of whom were suicidal. I didn’t receive much help or supervision in my new job, and I was panicking about possible impending crises. My sleep began deteriorating, and my insomnia snowballed into five straight days with no sleep.

I made an appointment with a local family doctor, who prescribed me two to four milligrams of Klonopin nightly.

My nerves were on edge from the sleep deprivation, and I was afraid that nothing could put me to sleep. So, to give myself the greatest possible chance of sleeping, I took four milligrams of Klonopin the night I picked up my prescription.

I woke up the next day feeling like I’d been in a coma. The Klonopin had worked. It had worked so well, in fact, that I realized I didn’t need all four milligrams. So, for the next few months, I took two milligrams of Klonopin nightly. When two milligrams stopped giving me sound sleep, I went up to three. I was on Klonopin for a total of fourteen months.

Although I was initially very thankful for the Klonopin, I was deeply unsettled that I was relying on a drug, particularly a “benzo.” I had been told by my counselor to “stay away” from this class of drug. So, a few months into my Klonopin use, I decided it was time to discontinue it. I hoped to simply replace the Klonopin with something milder, so I would skip my Klonopin dose in order to try other classes of sleeping pills, natural sleep aids and remedies, or vitamins and minerals. I desperately wanted to be able to sleep without Klonopin.

But nothing worked. I could only sleep if I resumed the Klonopin.

In the fall of 2008, I searched the internet for answers to my dilemma and came across the phrase “benzodiazepine withdrawal syndrome.” I learned that my brain had become physically dependent on benzos. I learned that the dose I was on was very high, that I had been on it for much longer than is recommended, and that discontinuing the drug abruptly is dangerous. Finally, I learned that withdrawing from benzos often leads to withdrawal symptoms, including withdrawal-induced insomnia (or “rebound insomnia”).

I finally understood that benzodiazepine withdrawal syndrome was the reason I hadn’t been able to sleep those times I’d abruptly discontinued Klonopin. I also understood that, if I wanted to sleep naturally again, I’d have to get off Klonopin—and stay off. I began a 20-week taper—I later learned this is considered a faster taper than might be advised—during which a compounding pharmacy sent me capsules with weekly reductions.

Halfway through my taper, my sleep began deteriorating, and I quit my job to move in with family members. When my taper ended, my sleep stopped entirely.

The five and a half months that followed the end of my taper included the very worst moments of my life. Due to rebound insomnia, I went many days at a time without anything resembling sleep. At times, I battled suicidal thoughts around the clock. During this horrific withdrawal-induced insomnia, I tried natural remedies much like I had before my taper. I tried green smoothies and a raw food diet. I tried sauna therapy. I tried removing toxins through a foot bath. I tried minerals. Nothing worked at that time, and I believe that is because my brain still needed more time to heal.

But at five and a half months off Klonopin, all of my natural sleep came back! It had begun coming back gradually, then, in a matter of days, I was sleeping great! The use of a sleep tracker really helped me at that time when it was hard for me to believe I was sleeping again.

At the time my sleep came back, I had been drinking green smoothies and taking a liquid multivitamin for a few weeks. Many of my family members are interested in nutrition, so their enthusiasm led me to search books and articles for nutritional cures for sleep.

I personally believe that time is the healer of benzo withdrawal, and that my own healing didn’t come until my brain had been given enough time to bounce back. However, something jumped out at me about my newfound sleep: I was falling asleep quickly and sleeping longer and more deeply than I had in the past. In other words, I was sleeping betterthan before I had ever had sleep problems! As a result, I began feeling confident about the connection between nutrition and sleep.

As you can imagine, I became highly interested in the correlation between nutrition and sleep. I wanted to know more. What was the relationship between the two? Why were the green smoothies and the multivitamin helping me so much? And what were the bare minimum actions I needed to take to maintain good sleep for life?

I have spent the last several years of my life exploring the answers to these questions. My research led me to believe that certain nutritional actions are connected to good sleep, specifically, that higher levels of nutrient intake are correlated with sleeping better. I learned that the refined and processed foods of the Western diet have been stripped of nutrients and also contain food additives, some of which can disrupt sleep. The ones that disrupted my sleep every time are artificial sweeteners and MSG (both of which have many names). I learned that we can eat a sleep-inducing diet by avoiding inflammatory foods and instead eating foods that quell inflammation. Finally, I learned that foods high in sleep-promoting nutrients really, really help.

Of course, everyone’s body is different, but I find that my sleep is best when I drink green smoothies every day. Organic greens are among the foods highest in calcium, magnesium, and potassium, three nutrients correlated with good sleep. In addition to making sure my diet is nutrient-rich, I take a high-quality multivitamin daily, having become convinced that our need for more nutrients is higher than ever. I take the sunshine vitamin, Vitamin D3, in supplemental form every day (while gettingrealsunshine as much as possible, too)!

Back when I was prescribed Klonopin, I didn’t know that nutrition had anythingto do with sleep. If I had known then what I know now, I believe I could have prevented the worst experience of my life: Klonopin dependence and withdrawal.

Yet, my experience ultimately led me to the good sleep I enjoy now. I am so thankful for all that I learned through Klonopin withdrawal, as it helped me become a better sleeper and a healthier, happier person in the long run. 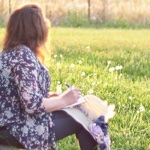 Audrey Wagner is the author of Klonopin Withdrawal and Howling Dogs and Sleep While You’re Still Alive.  She holds an undergraduate degree in Philosophy and graduate degrees in Counseling and Theological Studies. She enjoys reading, writing, photography, crafts, nature, church, and time with people. You can visit Audrey at her Amazon Author Page.