Around two years ago, I made the decision to stop taking psychiatric medications. This came out of a combination of things, including a longtime resentment of ingesting chemicals, the fact that my depression was getting worse, and meeting individuals who had actually made it through the process. My health was concerning me: I felt my eyesight declining, I was constantly lethargic, and, due to dizziness, I had to steady myself before going down stairs. Mostly it was that I was approaching forty years of taking imipramine, the first tricyclic antidepressant developed in the 1950s. Coming to this realization was sobering; given my hope of living until the fabulous age of 100, I was facing the possibility of taking it for another forty. This was not something I wanted, so I decided to prepare a plan for withdrawal.

This wasn’t my first attempt at withdrawal. My first taper ever, in the early 1980s, was orchestrated by a prescriber, with typical instructions to cut the dose in half for two weeks, then half again before stopping the drug completely over six weeks. It was a disaster, causing me to lose all confidence in my ability to live without chemicals. Later, I tried splitting tablets, white knuckling it through cold turkey, and skipping doses: nothing worked. I clung more tightly to medication, my magic feather, giving it a most healthy portion of credit for all of my accomplishments. Back then, there was no available information on safe tapering, no internet resources, no community. It was a solo endeavor, and each time I was unsuccessful, I lost a little more faith in myself.

But in the last few years, I’ve discovered such supports as The Recovery Learning Community, Surviving Antidepressants, the SSRI/Antidepressant Withdrawal Facebook group, and The Withdrawal Project. With more resources to draw from, I learned to taper more slowly than I had in the past, tackling one medication at a time. At my starting point, I was on Rexulti, Trileptal, risperidone, imipramine, and Klonopin. I was also prescribed Adderall, using it daily to combat the constant sedation caused by the other medications. As I took less of the medications, my body reacted, especially when I began the imipramine withdrawal. My symptoms were similar to an allergic reaction: I had trouble breathing, nasal congestion and sneezing. I was constantly nauseous, and at random times would break out in hives that would disappear as quickly as they came. I had the sensation bugs were crawling on my skin and I would lie awake for hours, slapping at them, repeatedly turning on the lights to make sure they were not there. Because the drug is also used for bedwetting, it had been affecting bladder control, and my body had to relearn that function on its own. The crying was uncontrollable, and I caught up on all the tears I had not shed for four decades.

Like many others, I intuitively didn’t buy into the “relapsing disease” theory causing my discomfort. I was very in touch with this being the physical reactions of withdrawal, and it has been physical activity that has helped me to move through the worst of it. I have survived by moving and by doing, and by pushing myself beyond my limits. Sedated since my teens, I never needed to know how strong I could be.

In the process of withdrawing, I discovered the benefits of yoga, a new endeavor for me, having always addressed my struggles using intellect and words. For so many years, I was out of touch with my physical self, too lethargic to engage in exercise for more than brief periods of time.  At first, I was stiff and uncomfortable, secretly resenting the instructor for asking me to do something strenuous. I had difficulty twisting from my center, a movement my yoga instructors informed us is calming to the nervous system and a benefit to digestion. Due to the meds, my belly was bloated with weight gain and chronic constipation. Several weeks in, I realized that despite having to bribe and pry and coax my reluctant self off the couch, I always felt better after yoga class.

If some physical activity is good for me, I reasoned, then more must be better. I decided to take tap dancing lessons again––I had many times before, but had always given up––and this time I didn’t quit. Learning choreography was a challenge, so I decided to film the dances and watch them repeatedly until I could remember. I will never be a star and even now, that is all right with me. Well-meaning people gently suggested how I might make improvements: Perhaps if you didn’t stomp quite so much, if you could appear more relaxed, more graceful, smile more. I didn’t tell them that I was not yet in a position to dance for the joy of it or to worry about my form. When I put on my tap shoes, I am still dancing to hold onto myself.

During the summer, I go the beach every other week, logging hundreds of miles to Rhode Island and back. I’ve taken up boogie boarding with all the vengeance a 50-something-year-old woman can rustle up. Plunging into ice cold water feels like exactly what I need. While driving, memories of years and years passed return to me in new ways. It feels like my brain is making new connections and I am experiencing emotions that have been frozen in time. Though I’m grateful my body has preserved all of this for me, it is not easy. But when I can look at what I am doing, this thing that for so long I believed myself incapable of, I think about what else is possible.

Before anyone reading thinks this is a story of success, it is not. Not yet. I continue to have undignified moments where the only thing I can do is scream. Loud, out of control screams in an effort to release the emotional and physical pain inside of me. I kick and pound the file cabinet until my palms swell. My crying bounces off the walls, falls into the crevices of my hardwood floors. Exhausting myself in this way is sometimes the only thing that helps.

When I have a window of okay-ness, though, it feels like I am home free. That is when I want the day never to end. In those moments, I think that all the suffering has been worth it. Now five months off all medication, I go to yoga five times a week and tap dancing three. I see the parallel between physical and emotional endurance, and, though I’m supposed to stay on my own mat, can’t help comparing myself to others. My competitive spirit kicks in: I tell myself that if the person next to me can hold a pose for the duration, then I can, too. If other human beings can get off this poison, then I can do that, too. As I gain strength physically, I am more able to weather the continuing discomfort of withdrawal. These days when I take the stairs my head is clear, and I can feel my core, the strength and center of my being.

When my spirit fails me, I look for inspiration where I can find it. On Fridays, there is a yoga teacher whose class I try to catch if I’m not at tap. He puts us through a challenging routine, moving fluidly around the room, correcting positions, saying, “Nice, nice” as he passes by. For that encouragement, I will hold on much longer than I want to, whether or not his words are meant for me. When the weather is hot, drops of my sweat fall in small puddles onto the mat. I think about the toxins that are being released along with my salt. When the hour is up, this teacher makes a point of connecting with everyone before they leave. “Nice work, good job,” he says, making eye contact. I take in his words, imagine they are for more than just the past hour of yoga I have spent. 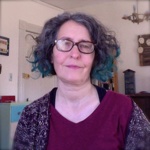 What a beautifully written…

What a beautifully written story. Thanks so much for sharing it. Yes, it's extremely difficult surviving decades taking our 'medicines'. It's even harder surviving their withdrawals, but the rewards are many.

I wrote a memoir describing what it's like being heavily drugged (w/ECT's to treat the drug-induced crippling depressions) for a lifetime, detailing all my cold-turkey withdrawals at the end of those 35 yrs, my legal fight against my own mental health facility for 'neglect of care' for telling me it was 'just fine' to cold turkey off Klonopin then leaving me to die at home, alone. And by all rights, I should have. And finally my recovery. Aside from learning that Psychiatry is based on fraud, deceit & outright blatant lies the others are 1. Benzo withdrawal doesn't have any hero's, it only leaves survivors 2) The brain heals in it's time, not ours. And in Psychiatry 3. Blame the patient, at all costs, blame the patient.  But our rewards are many. Permanent cognitive impairment and all. Thank you for surviving your decades on the drugs, sharing your story and sharing the methods you used to nourish your soul back to health. Today we can appreciate looking at the intricate beauty of a flower or pretty glistening rocks. Relax while listening two cardinals talking to each other from high in the trees. We've been given a new lease on life. Happy traveling on your journey too!

I'd like to share a poem at the end my book with you. I wrote it after psychiatry stole from me everything it could steal.

This mask I wear, it hides me so very

Harboring pain inside that no one can tell.

If it weren't for this, I would certainly die,

How many times have I tried suicide.

Only, I have to reveal what I've hidden so well,

I have to come out

I have to Tell.

They say to feel human, wholesome inside,

Do it with Pride.

Be proud of your name.

And never forget to embrace yourself.

Be Gracious, have Patience,

Always be thankful, They're just